Elon Musk is well known for his bold ideas and unconventional ventures. He founded Tesla, a company revolutionizing the electric vehicles market; SpaceX, a famous aerospace manufacturer; The Boring company that is reimagining infrastructure and tunnel construction services; and OpenAI, which is a startup making big leaps in the field of artificial intelligence. It’s highly probable that the most ambitious goal Musk is trying to achieve has nothing to do with visions for the future of transportation or even space travel. One of his companies is working on products that can change the way we think and experience the world.

Neuralink, a neurotechnology company that Musk founded in 2016, is developing implantable brain–machine interfaces (BMIs). It’s turning decades of brain research into the world’s first in-brain wearable device that would allow people with paralysis to control assistive technologies. Like all of Musk’s companies, they’ve set aggressive goals and are planning to release their first version very soon — in the 2020s. We were lucky enough to work on the design for the first Neuralink device, and here is how we did it.

Finding a balance between usability and futurism

Neuralink’s first product is a wireless implantable device that is unique in two important ways. First, it has extra high bandwidth as a result of having thousands of tiny neural threads that are inserted in a user’s brain. Second, it’s bidirectional, as it can both read and write electrical signals to and from your neurons with the neural threads.

Neuralink’s engineers and researchers have developed a surgical robot that in many ways mimics the functionality of a sewing machine. It has a miniaturized needle that can accurately insert neural thread into thousands of locations in the brain’s cortex. These threads all lead back to Neuralink’s proprietary ‘pills’ which house microelectronics to process and interpret thread data. That data reaches the outside world through the Link, a wearable worn behind the user’s ear, which is the part of the system we were brought on to design.

When we started this project, we had two values we wanted to create within the end user experience. We hoped to create something that wasn’t intrusive or distracting when users are interacting with other people. We wanted the product to tuck away — almost out of sight — and have a soft and empathetic design aesthetic to balance Neuralink’s fearless vision of the future. We also wanted to create an experience where users could feel proud of this cool gadget that gave them a superpower that other people didn’t have. To get there, we had to focus on making a product that, when observed up close, appeared to be something futuristic.

Despite the fact that the product won’t be launching until the years 2024-2025, we still wanted to keep our design grounded in reality. The product needed to have enough battery capacity to run for a long time; it needed to be light enough to be worn comfortably and also be designed such that it could be easily swapped out with a fully charged unit when the batteries were drained.

Breaking out of the lab 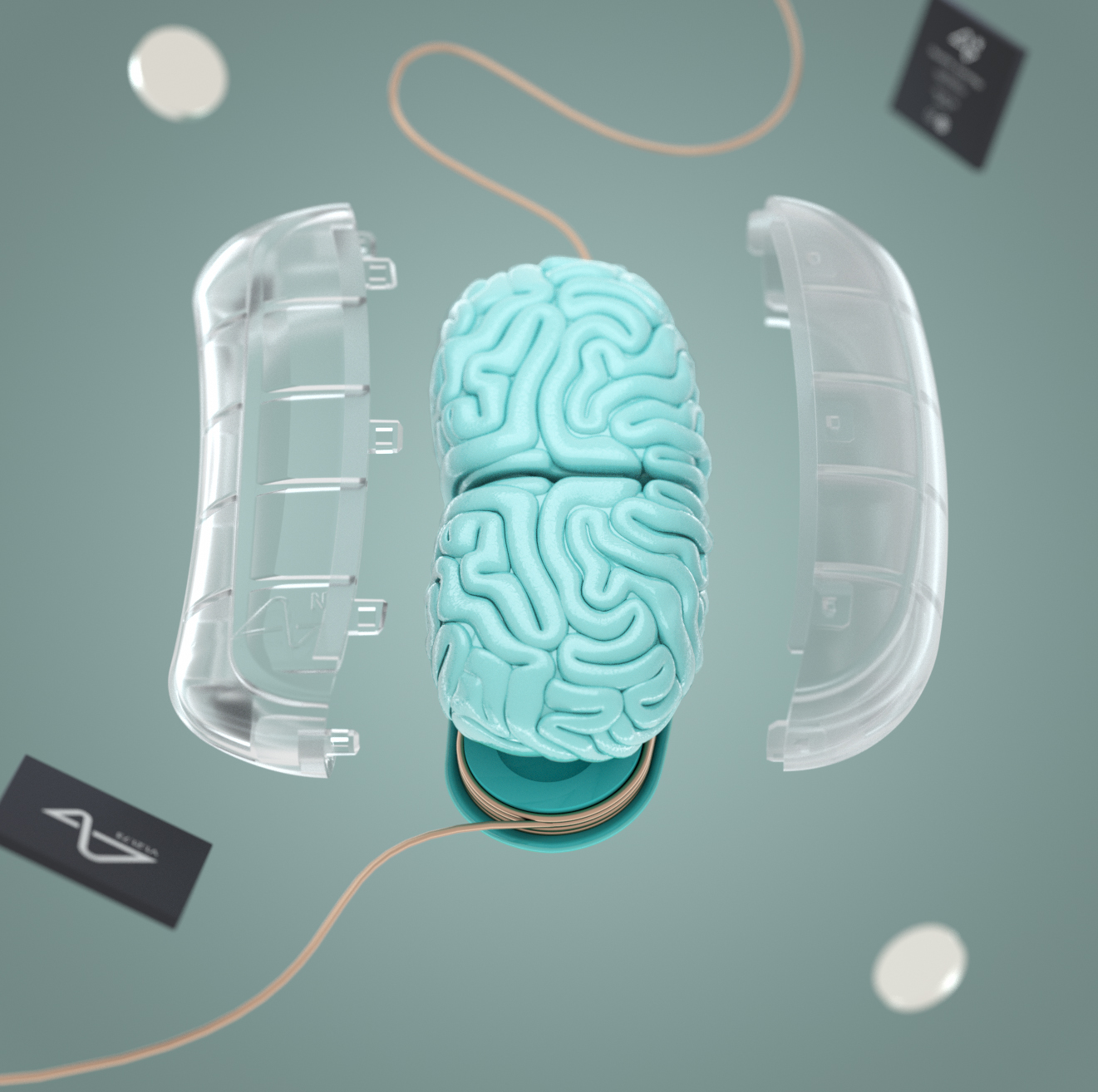 It appears that Neuralink is creating an entirely new category in the market, but in fact, they are doing an amazing job of building upon a long line of academic research carried out over the last few decades. To better understand how Neuralink has been able to accomplish this, we decided to dive deeper and learn more about the history of BMIs.

One of the most popular existing BMI devices is called the Utah Array — it’s a chunky gadget used within laboratories and medical research environments that allows people to navigate keys: when they think up/down, right/left, the mouse moves to reflect their thoughts. It has 128 stiff electrodes in each array that is screwed into the patient’s head and then wired to a computer. Because of its large size and the awkward way that it hangs off a person’s head, it can only be used within hospitals and clinics.

Neuralink uses a similar approach, but is using advances in material science, robotics and microelectronics, so the product development team was able to make it in a far smaller and more flexible package. Also, whereas the Utah Array has 128 electrodes, Neuralink could support as many as 3072 electrodes. This creates a higher density of sensors, resulting in a device that can ‘read’ user’s intentions more effectively. So, with these possibilities, the Utah Array’s simplistic features seem like the tip of the iceberg. With higher bandwidth, more complex interactions will be possible.

When we started designing the wearable device, there were no requirements that defined where the device needed to be mounted on the head. We consulted with Dr. Matthew McDougall, the Head Neurosurgeon at Neuralink, to better understand the surgical limitations of the Link placement. We understood that finding a rigid area of the skull with the least amount of soft tissue would be ideal, both in terms of making it easier for a user’s caregiver to apply the wearable to the user’s skin, as well as to ensure the best power and data transmission through the scalp. 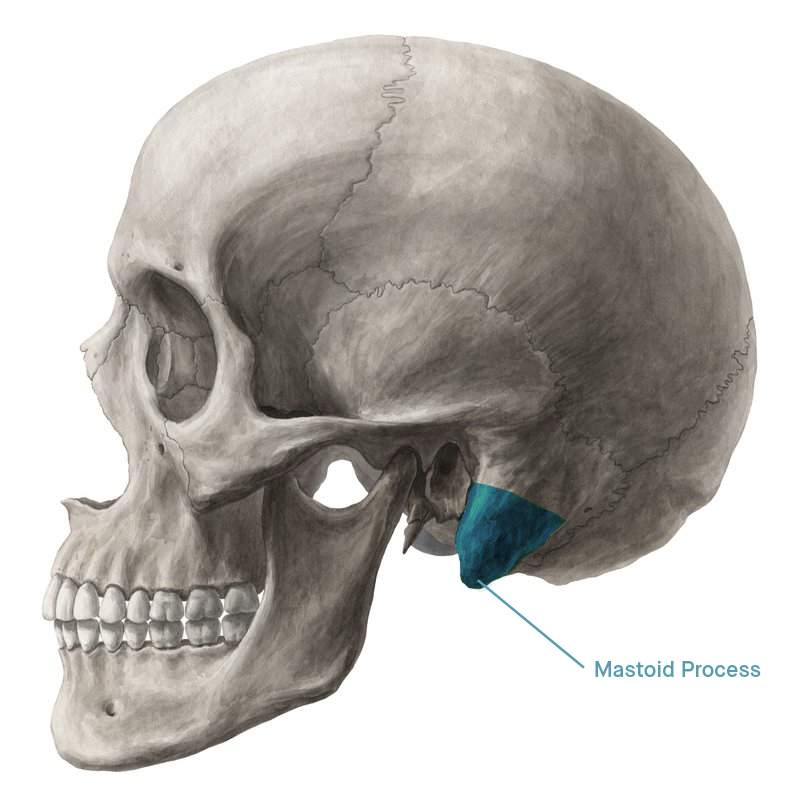 Knowing that we needed to place the Link on the hard part of the skull, we also didn’t want to make people shave their hair or change their appearances (as they would have to do with the Utah Array). One location on the head that we learned was both rigid and hairless, was the mastoid process, a protruding bone directly behind your ear. We also liked the idea of putting the Link there because it would be partially hidden by the user’s earlobe, making it less intrusive in their daily lives. We consulted with Dr. McDougall and he gave us the green light.

After we understood where the device was going to be located, we wanted to understand how it would fit different ear and head shapes in order to check for comfort requirements. We knew that we didn’t want the Link to press up against the user’s earlobe, go over onto their hairline, or hang off of the mastoid process. To begin to get a better picture of the variation in head shapes, we 3D scanned the heads of about 30 volunteers.

To further improve on this data, we aggregated this data with a database of head shapes provided by the National Safety Council of America. It helped us to get an accurate idea of the features and critical dimensions of the average sized head to make sure that the design we came up with would fit as many different head shapes as possible.

As easy-to-use as AirPods

It is likely that the first iteration of the product is going to be a wired version, making it so that people with paralysis would not need to swap out the Link every time the batteries run out of power. But as Elon Musk has mentioned before, there is a larger vision to enable all people to take advantage of the power of BMI’s. Neuralink imagines a future where a BMI will be an everyday product that is as easy to take on and off as a pair of Airpods.

In order to achieve that level of seamlessness, we came up with an innovative two-step method to wear the device: First, users would apply a magnetic silicone patch behind their ear that was strong enough to stay on for at least a week. We worked with 3M for several months to find the right adhesive that is capable of sticking to skin for seven days without peeling off.

Second, users could place the Link close to the magnetic patch and it would self-locate to the patch — thanks to the magnets. This seamless hot swap was a critical feature to introduce, since the Link needs to be replaced every 3 hours with a freshly-charged unit.

Diving into the brain’s magical future 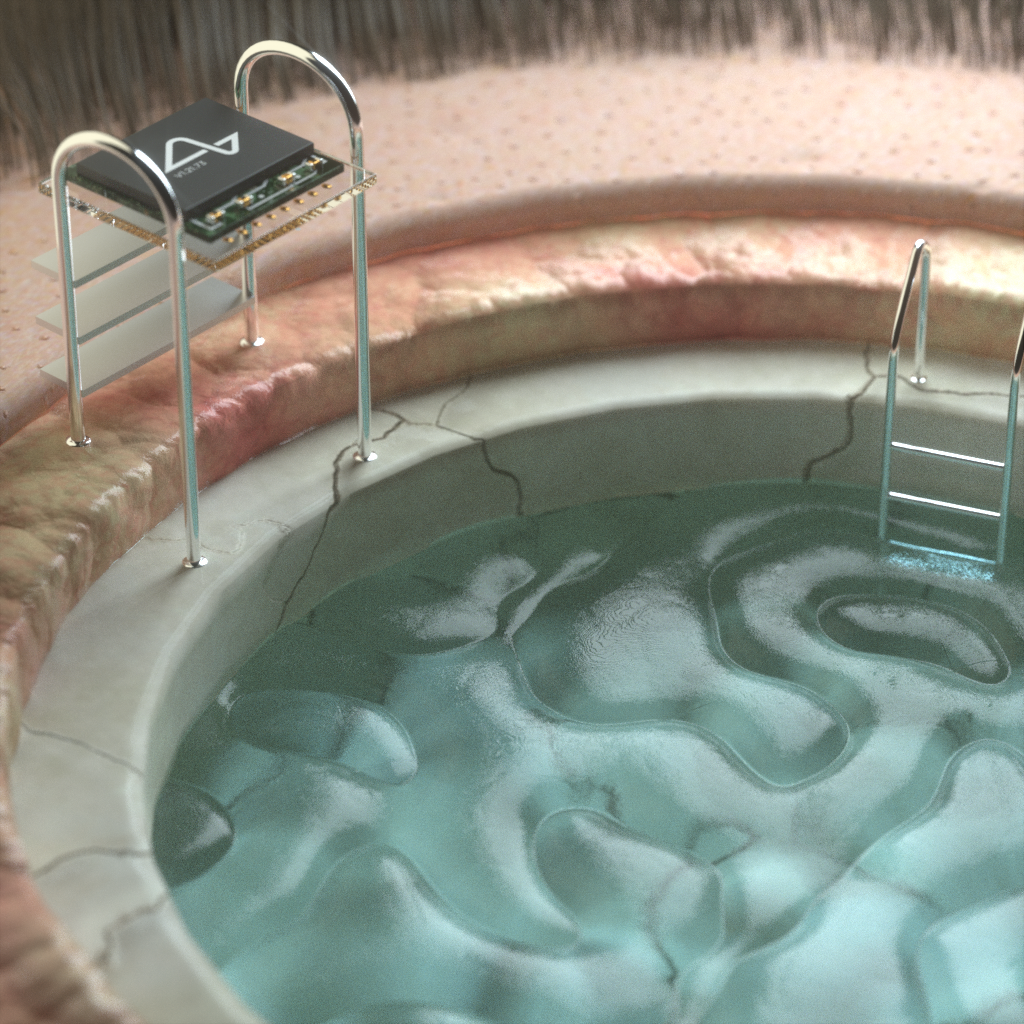 In the long run, Neuralink’s mission is to “help secure humanity’s future as a civilization relative to AI.” It means that years from now, some version of Neuralink may become available to the general public. If and when that day comes, there will be a period of adjustment as people get used to living with those who choose to have augmented thinking.

Though this future sounds shocking and frightening to some, it’s not that surprising if we look closely at the history of user interfaces. For the last half of the 20th century and the beginning of the 21st century, our ways of interacting with computers has become more seamless and intuitive than ever before. We’ve evolved from using keyboards, to mice, to pens, to our fingers, to our voices, and the next logical step is totally frictionless interaction controlling computer interfaces just with our brain. Neuralink is one of the leaders in this space, and it was an honor, as well as an exciting challenge, to design a device that may define the next era of computing.